Golden Retrievers are widely known for their striking coat and friendly personalities.

Golden Retrievers actually come in a variety of shades that can affect their ability to participate in registered American Kennel Club events and other registered competitions around the world.

But which shade is the rarest?

What Is The Rarest Golden Retriever Color?

The rarest Golden Retriever color is commonly accepted as the rich and vibrant red shade. Goldens with red coloring can often be mistaken for Irish Setters, and typically have straighter and shorter hair that doesn’t feather as much around the legs and tail.

Red is the darkest color possible for purebred Golden Retrievers, and it’s a shade not often accepted at dog shows around the world.

Dark Golden Retrievers are similar to their red counterparts but don’t have the same amber undertone.

However, if you’re interested in showing your Golden Retriever at events or determining that it’s certifiably purebred, it’s important to understand common colorings and how they occur due to genetics.

Red is accepted as the darkest color possible for a purebred Golden Retriever.

Red Golden Retrievers can still be purebred and have all of the identifiers of the average Golden.

Many believe that Golden Retrievers were bred with Irish Setters in the past to create the modern red coat possible today.

Recognized groups like the American Kennel Club, The Kennel Club, and Canadian Club have different restrictions on which Golden Retrievers can perform and participate, often restricting the animal to a shade of Golden, excluding all variations of red.

Their bodies are slimmer because they were typically bred for hunting and sport, giving them more energy and speed than their counterparts.

They still share the same shedding rates and are tremendously patient and caring with children and younger family members.

If you’re looking for a pet companion that has a unique and beautiful coat but you still want to enjoy the many benefits of a traditional Golden Retriever, a red Golden Retriever would be an excellent addition to your family.

You may have seen breeders or shelters offering a black Golden Retriever.

This is likely an animal that has mixed breeding or poor family history.

It’s impossible for a purebred Golden Retriever to have a black coat as their genes are made of red and yellow fur types.

There are several dog breeds like the Flat-Coated Retriever that look like a Golden Retriever and have only slight differences in appearance.

The distinctions between these breeds matter most when professionally showing a dog but shouldn’t discourage or affect your decision when choosing a family companion.

The color itself can indicate if the animal has been bred with other breeds, which could increase the chance of potential genetic diseases and indicate improper breeding practices.

While the color doesn’t affect health, you should monitor your Golden Retriever’s coat for any changes in glossiness or shed rate.

All Golden Retrievers typically shed a lot and have luscious, thick coats that can quickly accumulate dirt and other particulates.

When your pet companion begins to suffer from illness or disease, they may begin to groom less during the day or develop mats and dirty spots.

They can start shedding at a higher rate or even develop bald spots due to overgrooming or stress-induced excessive licking.

Monitoring your animal’s coat is an essential part of taking care of a dog.

Regular grooming and baths keep them clean and healthy while giving you the chance to check for any bugs like fleas and ticks.

If you’re looking for a family dog that you hope lives for many years, don’t worry about factoring in its coat color and how that affects its health.

Choose the best pet companion for your family, and you’ll be thrilled with the friendly and caring personality of the Golden Retriever.

What is the lightest Golden Retriever shade?

This breed can’t be white unless it’s an albino, which should typically be avoided because of the higher genetic health risks.

Cream Goldens are usually called the English Cream Golden Retriever and have stockier bodies and are healthier than other Goldens.

Cream isn’t a rare color for this breed but could be rare based on your country.

Unlike red or mahogany, cream Goldens are often accepted at official events and can participate.

They have the same traits as other Golden Retrievers but can cost a lot more depending on the breeder.

Goldens can’t have a white coat, and the breeder is likely trying to entice with false promises or Goldens who have been bred with other breeds.

While the coloring may be beautiful and luscious, there are many breeders and shelters that have cream Golden Retrievers for much cheaper prices.

It’s unlikely you’ll need to pay an extravagant amount if you’re looking for a family dog.

If you’re looking for a pet companion to perform, always perform a background check on your breeder and ask for a full bloodline history of the dogs they breed.

Ethical breeders and adoption centers always have certifications they won’t mind showing to prove their legitimate professionalism and experience.

While adoption is always better, ethically sourcing animals from breeders may also be an option depending on your needs.

How many colors of Golden Retriever exist?

Goldens range from the darkest rust or mahogany color to a light cream.

The gene pool for purebred Golden Retrievers make some colors impossible like black and white.

Their wide range of coloring makes it easy to confuse them with other Retriever breeds.

If you like Golden Retrievers for their personalities or family-friendly attitudes, you don’t have to settle for the traditional Golden color.

This breed has a gorgeous range of possibilities while maintaining a purebred status.

You may not want to mix breeds in case of genetic deficiencies or a higher risk of certain diseases.

Consider looking into red, dark Golden, or cream Goldens for more color options in this breed.

Do Golden Retriever puppies change colors as they age?

If you’re looking at Golden puppies and hoping a few of them will lighten as they age, you’ll likely be disappointed.

Golden Retriever puppies often stay their original color but may imperceptibly darken as they become adults.

Puppies can be a range of colors not entirely based on their parents’ coats but also on their genetics.

The biggest color change for Goldens will happen as they age and their guard hairs grow in.

Older dogs need guard hairs to give them the extra protection their aged bodies require.

Their muzzles may turn speckled with gray and white as well as other parts of their body.

This is a normal change and should be expected the older the dog becomes.

A dramatic change from their regular coloring to white is uncommon and could be a sign of vitiligo.

Can Goldens have a fully white coat?

Goldens commonly have undertones or undercoats composed of white hairs.

However, purebred Golden Retrievers can’t be white or black.

Their genetics dictate that their coats will be dominated by red and yellow fur types.

This can manifest in a number of different shades, but some colors are entirely impossible.

With proper, ethical breeding habits, you can find dogs that look like darker or lighter coated Retrievers based on your preferences.

If you’re looking for a show or performance dog, check that the breeder is operating within approved standards based on your local kennel club.

Those looking for family dogs often have an easier time choosing but should still be aware of the breeder’s reputation and ethical policies.

What is a Flat-Coated Retriever?

A Flat-Coated Retriever is a great alternative for families looking for a happy, friendly dog that looks like a Golden Retriever with a darker coat.

This breed often has a black coat and is incredibly energetic and enthusiastic.

They’re one of the happiest dog breeds and love being around families and children.

They need a lot of exercise and outdoor entertainment to burn off their endless reserves of energy.

Similar to Golden Retrievers, they mature slowly with many owners believing they never really lose their puppy excitement and enthusiasm for life.

Expect mischief and fun when considering adopting a Flat-Coated Retriever.

They’re an excellent alternative to a Golden Retriever and will prove to be an amazing new addition to your family. 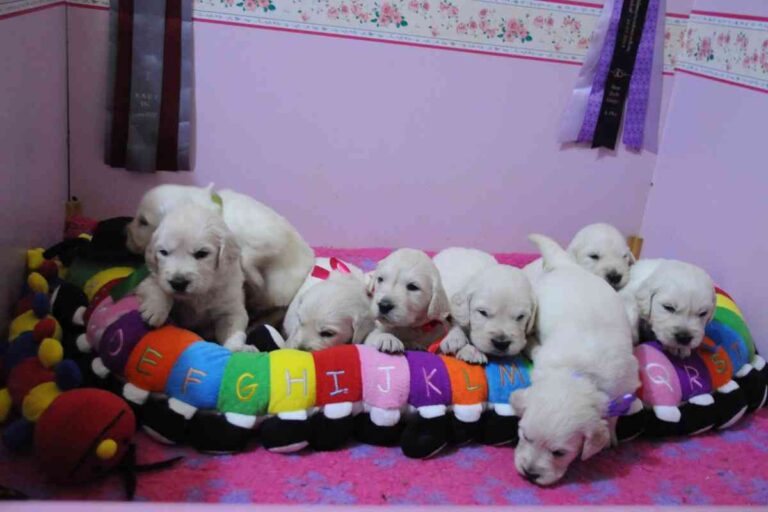 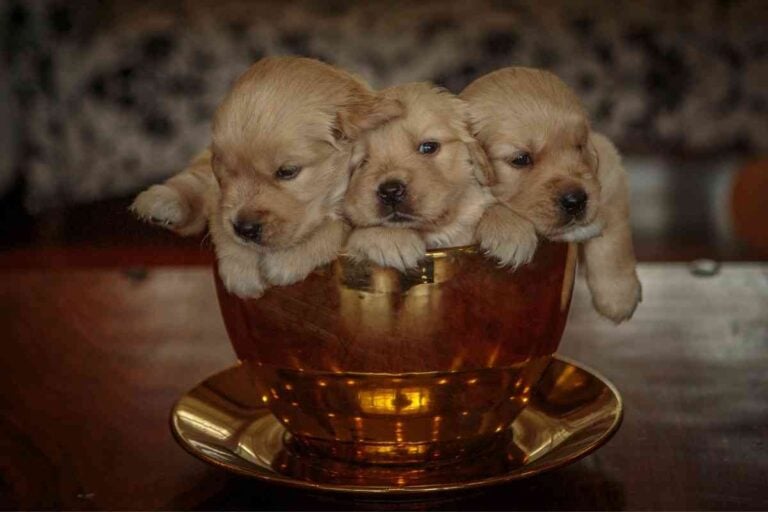 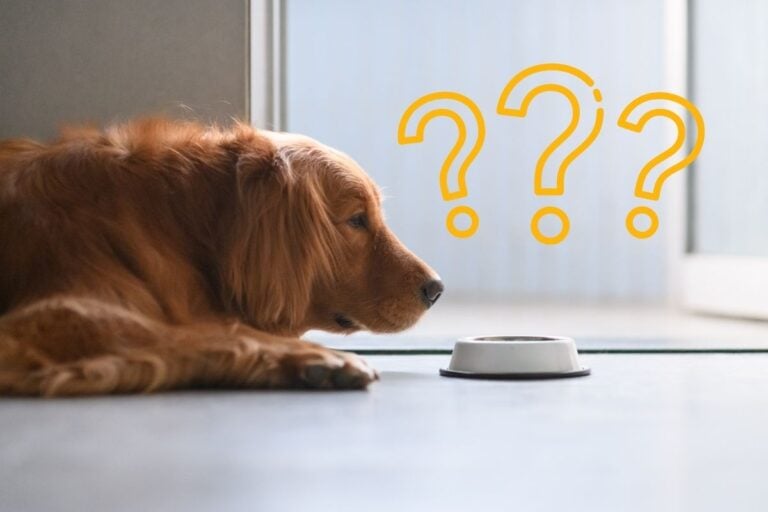 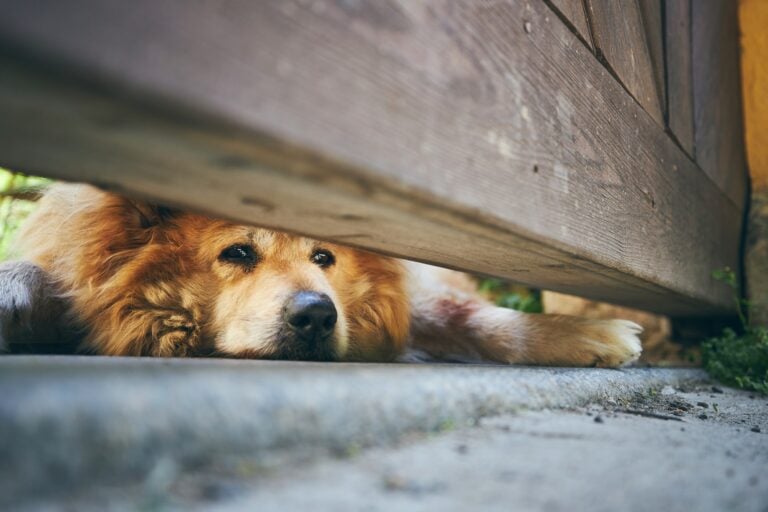 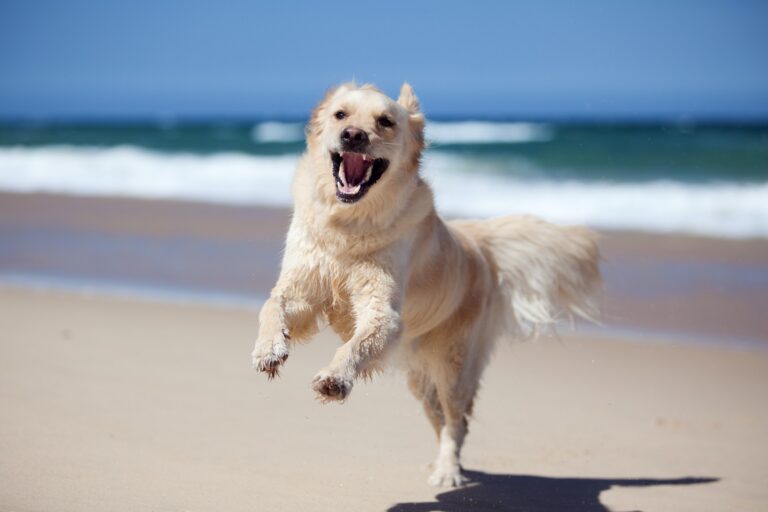