Golden Retrievers are one of the most recognized family-friendly breeds and have a reputation for being sweet and sociable. One thing you might also hear about Golden Retrievers is that they smile a lot. But what does it mean for a Golden Retriever to smile and why do they do it? All of your questions on this topic are addressed in the following article.

Why Do Golden Retrievers Smile?

A Golden Retriever may “smile” for different reasons depending on what behavior they are actually exhibiting that we interpret as a smile. Snarling is sometimes called an “aggressive smile;” the opposite of that is a “submissive smile.” Finally, a Golden Retriever may merely appear to be smiling even while its expression is neutral such as while panting.

Most of us know this as a snarl. However, when explaining why dogs smile, multiple authors on the topic will bring up snarling in contrast to the other reasons a dog may show its teeth. They have dubbed it the “aggressive smile” even though it is not really a smile at all.

Naturally, we associate a dog baring its fangs with danger, and for good reason. It is the easiest to understand of all the smile iterations, likely because it is a universal threat among a great many animals; and we are probably hardwired to recognize it as such.

This behavior is characterized by raising the lips to display as many teeth as possible, especially the large canines. It is a warning that the dog is feeling aggressive, scared, or insecure and may react violently.

While Golden Retrievers are among the most social and docile of breeds, any dog can be stressed into a fight or flight reaction under the right circumstances. If you notice that a Golden Retriever or any dog might be flashing you the aggressive smile, it is wise to treat the situation with extreme caution.

When I first went to work researching this topic, I thought the Golden Retriever smile only referenced the submissive smile. That is because it is a rare and unique behavior, and, unlike the other so-called smiles, there exists no other exact term to describe it.

The submissive smile, unfortunately, resembles an aggressive snarl in several ways, yet it has the opposite meaning. Any or all teeth may be shown but, in particular, the dog will display the front teeth with maybe the lips not stretched all the way back.

The purpose of this smile is to put you at ease, rather than to threaten. A Golden Retriever who bares his teeth in this way is trying to communicate deference, harmlessness, friendliness, or even playfulness. If it looks a bit goofy and there are no other indications of a problem, you are likely seeing a submissive smile.

Some dogs are blessed with the great gift of looking happy even when they are probably not emoting anything at all. The Golden Retriever is one such breed, for when they pant and their tongues loll, the corners of their mouths raise up in a way that resembles a human smile.

Interestingly, this is what people most frequently refer to when they say their Golden Retriever “smiles.” Although, like the aggressive smile, the panting smile is not smiling in the way that humans mean; it is not a direct reflection of happiness on the dog’s face no matter how much it seems that way.

That is not to say that your dog isn’t happy when he is wearing a panting smile. Indeed, if you have just exercised or played with your Golden Retriever, they may be content as well as tired. After all, exercise releases endorphins for dogs as much as humans, and Golden Retrievers are often pleased to be in human company, panting or not.

How Do I Tell The Difference Between Golden Retriever Smiles?

How Do I Tell The Difference Between Golden Retriever Smiles?  The key is body language. Dogs, including Golden Retrievers, communicate with their whole bodies, not just their faces.

When it comes to the panting smile, a dog can pant no matter what it may be feeling. Panting can develop concurrent to relaxation or stress. So it is vital to be able to read a Golden Retriever’s entire range of body language signals, especially when trying to distinguish between aggressive or submissive lip curls. Here are some telltale cues to look out for:

One or more of these behaviors will accompany an aggressive smile or snarl.

If a Golden Retriever is treating you to a sweet little submissive smile, you should be able to tell right away based on the rest of their presentation.

Now that we know the difference between the three kinds of Golden Retriever smiles, let’s dig a little deeper into the scientific reasons why they adopt any of these displays in the first place.

Domesticated Behavior: Do Golden Retrievers Smile Because of Domestication?

Also yes! Soft, cute expressions have been bred into dogs over the millennia. Smiling or the appearance of smiling may be partly a result of the selection pressures of domestication.

Breed Behavior: Do Golden Retrievers Smile Because of Their Breed?

Google “smiling dogs” and you will turn up oodles of pictures of panting smiles and maybe of few lists of “smiley” breeds referencing that look. While there is no comprehensive data on which breeds smile submissively the most, anecdotally, Golden Retrievers commonly do. Any dog is capable of an aggressive smile, aka a snarl.

Not everything is genetics. There are some behaviors that dogs pick up or enhance due to growing up in a human household. If your dog can affect an extra happy expression and is rewarded, it will want to repeat that behavior. Golden Retrievers may smile submissively more or open their mouths wider when panting if it gets positive reactions out of their humans.

Our Perception: Is The Golden Retriever Smile Just Our Imagination?

In a way, yes. It’s helpful to remember that, at the end of the day, Golden Retrievers do not smile as humans do. They have expressions similar to ours but they did not evolve to grin just to show happiness.

Humans are champions at anthropomorphizing, so we label anything vaguely resembling a smile on a dog as such, even if the dog’s real feelings are neutral or hostile! That said, we have intentionally or unintentionally bred and socialized dogs like Golden Retrievers to assume smiley looks when they are being social with us. Studies have found that dogs are exceptionally good at reading our expressions, and eye contact between humans and dogs creates an oxytocin feedback loop in both of our brains. And that is certainly something to smile about.

Want to learn more about Golden Retrievers? Check out other recent informative articles on our website here. 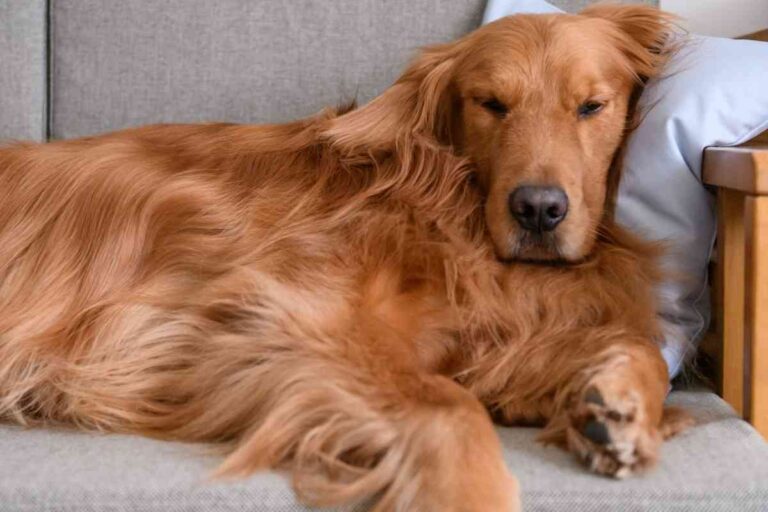 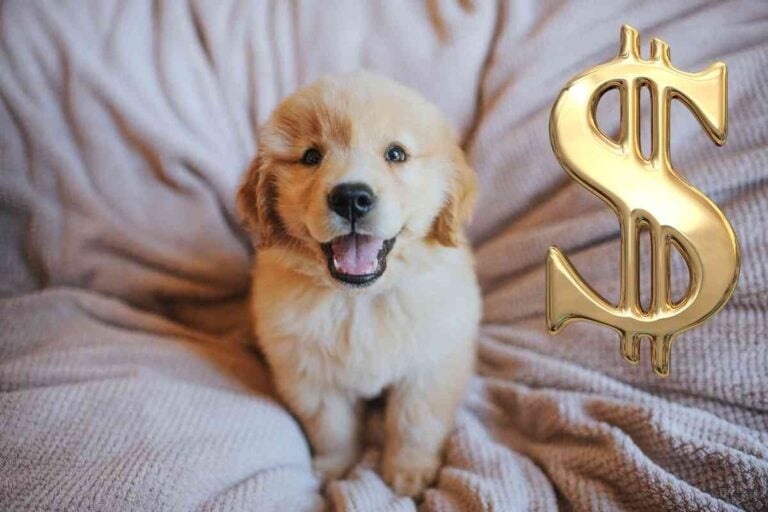 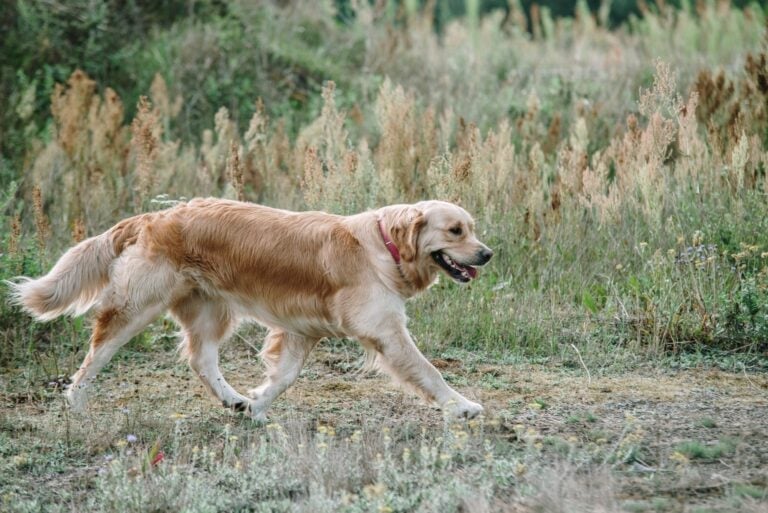 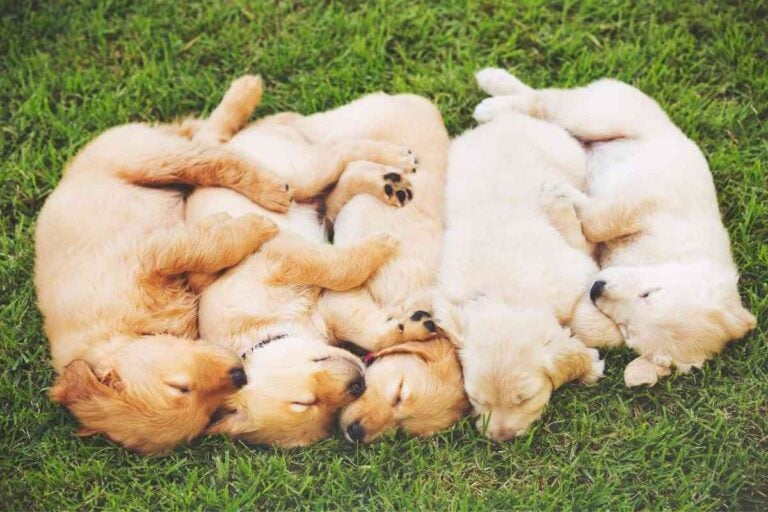 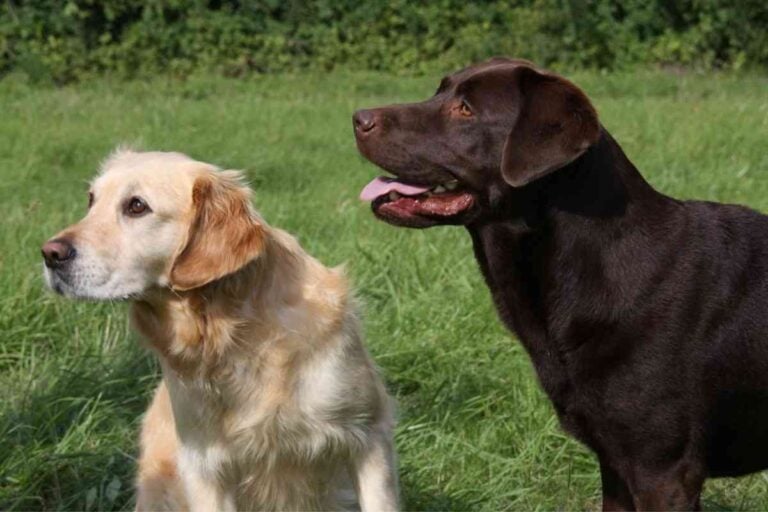 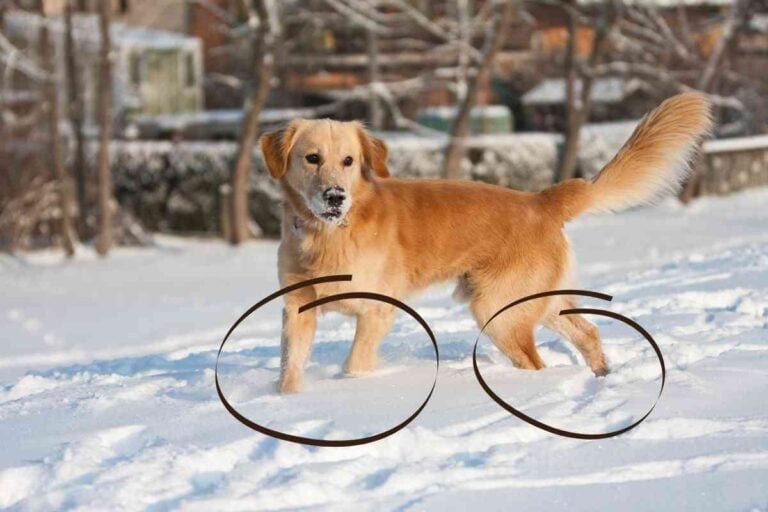