Having a Golden Retriever in your home is a great experience.

This dog is playful and a lot of fun and can make a great companion for everyone in the home.

One thing that you may start to notice as the dog gets older is that their face is turning white.

Many pet owners want to know why this is happening and some of the things they can do to prevent it.

Why is My Golden Retriever’s Face Turning White?

The most common reason that the Golden Retrievers’ face is turning white is due to the aging process. When they turn six to seven years old, they may be getting a bit whiter than normal. It is also possible that the white face will happen from a skin condition known as vitiligo and even from stress.

Let’s take a closer look at some of the reasons that the Golden Retriever’s face is starting to turn white and a few of the steps that you can take to make this process stop.

There are a few different reasons why the Golden Retriever is going to start getting some white on their face.

On occasion, it will just be a bit of white on the face that starts to show up, and other times it can seem like it is taking over the whole face and there is not much other color present.

Some of the most common reasons why a Golden Retriever is getting white in the face include:

The most common reason that the Golden Retriever is going to start getting white in the face is due to their age.

The aging process is similar to that of humans.

We just have to remember that dogs are going to age faster than humans.

As this breed starts to age, the hair follicles around the face will stop producing as much color as before.

As the dog sheds off the fur and the fur comes back, it can start to come in gray.

The fur that the dog is not shedding could turn white as well.

Like human hair, the fur of your dog is going to have keratin in it.

Over the years, the production of melanin in the skin will be reduced quite a bit.

This reduction in melanin is going to result in the face of your Golden Retriever turning white.

Most of the time, the entire fur coat is not going to turn white in this dog.

The whitening is most common around the face of the dog.

The texture of the fur can also start to change a bit, becoming coarser than it was in the past.

While the age of the dog is the most common determinant of whether the fur around the face is going to become white, you may also notice that it is genetics.

Besides the fact that a larger dog like the Golden Retriever is going to age faster than some of the smaller dogs, there are also specific genetics in these dogs that make it more likely that they will lose the melanin in the fur faster than before.

You can look to the parents for this one.

If the parents seemed to get more white around the face at an earlier age, then it is more likely that your Golden Retriever is going to have the same problem as well.

This is nothing to be concerned about and your dog is probably just fine.

You can take them into the vet to get a checkup if you need to help make sure the dog is healthy.

Outside of the aging and the genetic factors that can determine whether the dog is going to get more of the white fur around their face, the dog could suffer from this problem because they are under a lot of stress.

The exact science of this is still not fully known, but many assume that a lot of stress will prevent the body from functioning as it should.

One of the processes that can be prevented in the process of too much stress is the production of hair pigments in the dog.

Stress not only makes people look older, it can also make the dog look older as well.

There are a few symptoms that you need to look for when it comes to whether your dog is stressed out or not.

This is something that is hard to diagnose on your own.

You will need to discuss this problem with their vet to figure out whether stress is the right diagnosis for this issue or not.

You can then work with them to come up with a plan that will keep the dog from getting as stressed out as before.

They Have Health Issues

If none of the other issues seem to be the main concern here, then it may be time to take a look at the health of the dog to see if this is causing some of the issues.

There are a few reasons that are related to the health of the dog that can add to the whitening of their face.

One of the biggest health conditions that can cause this includes hypothyroidism.

This condition is going to mean that the dog has thyroid glands that are performing below what they should.

Some of the symptoms that happen with this include weight gain and skin complications.

This is a condition that you will need to treat with the help of their vet.

They will be able to give oral administration of a hormone to substitute for the work the thyroid is supposed to do.

This is something that the dog is going to need to take for the rest of their lives.

That is just one of the conditions that could be causing the white skin around the face for your dog.

Liver and kidney disease can do this, though it is not that common.

The vet will be able to help treat these conditions and the face will stop turning white if this does seem to be the problem with the face turning white.

The Condition of Vitiligo

There is a specific condition that can happen to cause the face of your Golden Retriever to turn white that is known as vitiligo.

This is a type of skin condition that will cause the skin of the dog to lose its pigment.

The leading causes of this disorder are not known yet, but it is going to happen when there is some kind of disturbance that is going on with the cells that produce melanin in the cells.

The extent to which this condition is going to affect each breed of dog and other pets is not predictable.

The same is said for humans who have this condition as well. The good news is that the only thing this condition will do is affect the appearance of the dog and it does not cause them any harm.

While this is rare, some dogs are more likely to have this condition, especially the larger dogs.

This condition is also known for being common due to the genetics of each dog so if their parents had it, they are more likely to have it too.

When Will My Golden Retriever’s Face Start Turning White?

Dogs are going to age faster than humans.

We already know that the dog is going to age several years for every human year, which means that they could start showing some of the signs of aging faster than many realize.

For the Golden Retriever, it is believed that they will age 15 years during their first human year, nine years during the second year, and then each year after that is about 5 years for this dog.

You may notice that the face of this breed will start to turn white somewhere between the time they turn five and seven years, though it is not uncommon for some of these breeds to have that happen a bit later.

Since the lifespan of the Golden Retriever is often ten to twelve years, this will be around the midpoint of their lives.

Since the most common reason that they have a white face is from aging, there is not much that you can do about this condition.

Keeping them healthy and active with lots of exercise and a good diet will help to stave off the aging process a bit and can make the dog feel better in the process.

With the right care and attention from their owner, your dog is going to stay healthy and the white fur around the face will be less common. 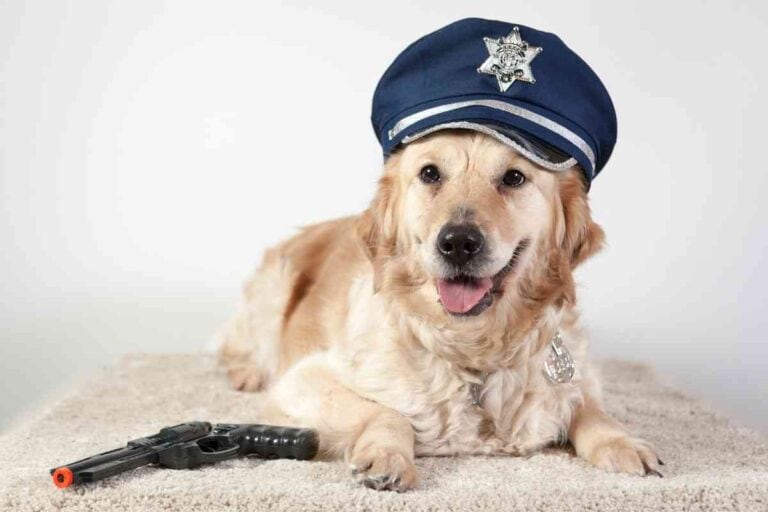 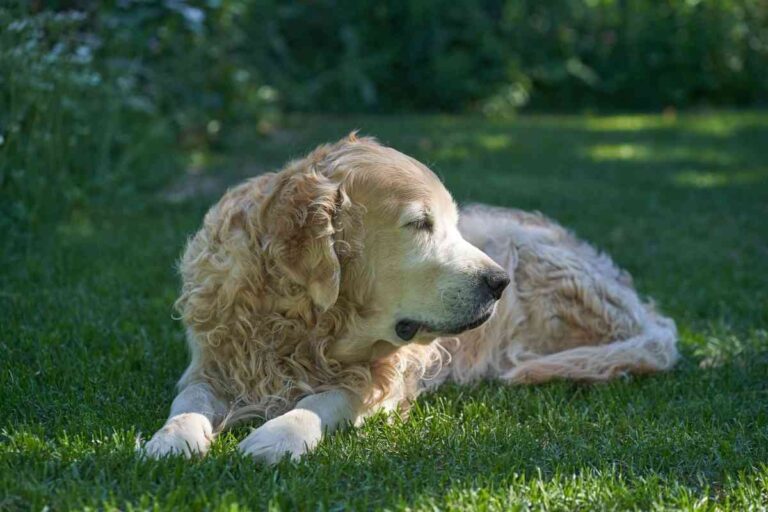 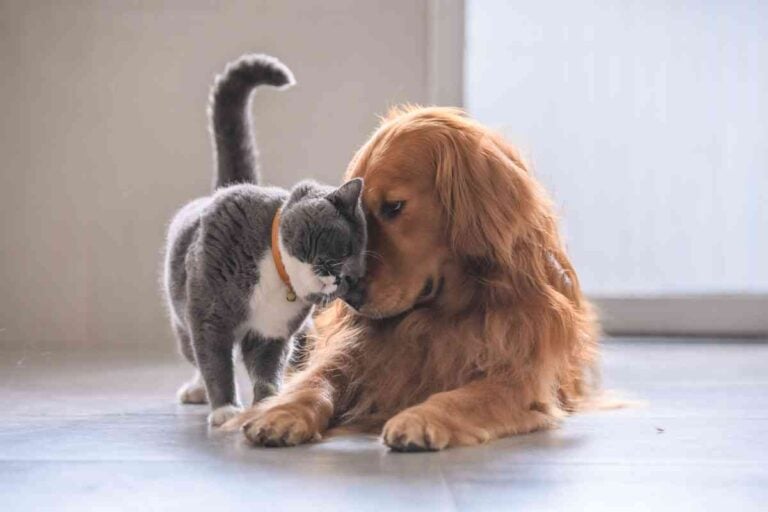 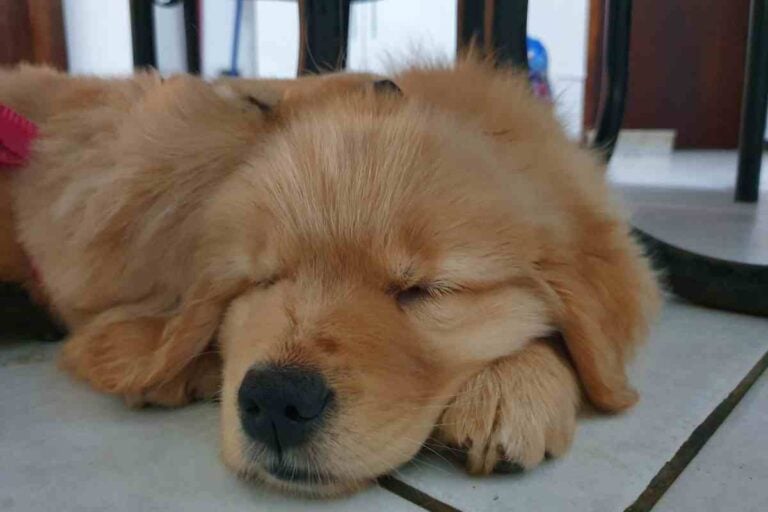